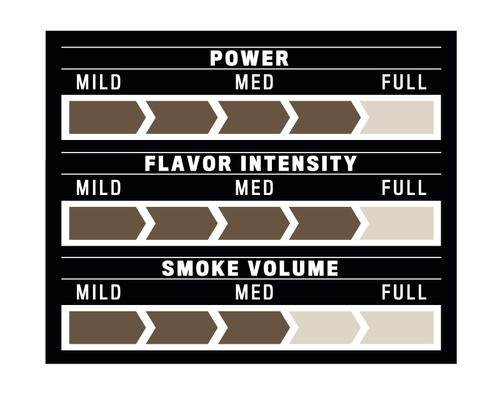 So if the idea of The King is Dead is to set you up to smoke Long Live the King, then I assume LLTK is going to be stronger, right? How strong are we talking?

I’d say it’s on the full side, the lower end of the full side. That’s our full-bodied cigar and for some guys, you know, it wasn’t strong enough. But we didn’t want something that would kick you in the face or lay you out. What we wanted was a cigar that was full of flavor and really complex.

So where do you get inspiration for the blends?

When I went to Leo [Reyes, a tobacco grower in the Dominican Republic], what I asked him for was old tobacco, rare tobacco, tobaccos other people ain’t using. So the first step was smoking pachuches like right off the bale and then finding things that I thought were very unique and then putting them together. So we put the blending car ds on the box that describes exactly what’s in it, but that was the first step. Then blending from there, so literally my whole idea was to use shit that other people don’t use. So by using very aged tobacco, when you smoke the cigar you know the tobacco is old as fuck. It’s reminiscent of brands that you know age the shit out of their tobacco, which to me gives you a very unique flavor profile.

Now there are other tobaccos that we haven’t yet incorporated that are beautiful tobaccos. Like Carbonel, it’s a Dominican grown Habano. You could be at a party full of cigar smoke and you light a cigar with just a little bit of Carbonel in it and the whole room would go (sniff sniff) ‘what’s that?’ It cuts through everything.

You mentioned that the first step in the blending process was to smoke pachuches but most cigar smokers have no idea what you’re talking about.

And literally my first blending trip with Leo, or my first trip down to the DR, was going to Leo’s factory and smoking 20 pachuches, taking the 15 tobaccos that I liked, bringing them to the factory and playing with them. And I mean dude, I’m a fucking 31-year-old white kid from Coral Gables. I’m not a cigar blender. But I have a good palate and along the way I guess I learned what I was doing to a certain extent, like what tobaccos work well with other tobaccos, and then you know, part of it is just luck of the draw. But like all the Caldwell shit I blended all those cigars.

But let’s be clear here when you say you blended those cigars. Obviously the actual blender at the factory has to have a lot of input in there because sometimes you want something, but it wouldn’t work. You may have fallen in love with a beautiful wrapper tobacco but when you try to get it to work in a blend, you need real expertise to pull it of f.

Yeah, and that’s exactly the process. I’ll say ‘I want this tobacco, this tobacco, this tobacco’ and you put them together and they taste great. But they’re missing this or they need that or something like that, and that’s where the Venturas (owners of the factory that manufactures Caldwell Cigars) come in and they’re like we should put this tobacco in because it’ll support this tobacco or take this tobacco out because it’s taking away from this tobacco. So I guess the gross blending process is something that was exclusively mine and the refinement of the cigar to make a finished product was much more William Ventura. You know, some of the tobaccos that I wanted to use, he would recommend modifying this percentage, or using seco here instead of something else. I’ve learned a lot working with the Venturas in this process.

Click HERE to check out our other Brand Breakdowns!