We love food, so we were pretty pumped to learn that no city in the world has more restaurants per capita that the Bayou City. At least that’s what Houstonians claim. We ate everything from fall-off-the-bone ribs at Luling City Market to one of the best slices of cheesecake we’ve ever seen at Kenny & Ziggy’s. We also had a chance to meet with Dwight Boykins, a cigar snob who also happens to be a Houston city councilman. Read the full interview here.

Speaking of cigar snobs, you’ll also find Ivan Ocampo’s interview with Mircea Monroe in this issue. It’s probably one of our most fun Q&As to date. You might remember Mircea from role in The Change Up and Sons of Anarchy. She’s currently working on Showtime’s Episodes, a comedy starring Matt LeBlanc.

Our other Q&A feature is decidedly less sexy, but still interesting as hell. Nick Jiménez talked to Charlie Camarda about his experience as a member of the crew on STS-114, the space shuttle mission that immediately followed the Space Shuttle Columbia disaster. As an astronaut on a Return to Flight mission, Charlie’s got a special perspective on Houston, NASA, and the role of cigars in celebrating great achievements.

In “Behind the Blend,” we explored the process and challenge of blending cigars through the experiences of three blenders: Litto Gómez (La Flor Dominicana), A.J. Fernández (A.J. Fernández Cigars) and Ernesto Pérez-Carrillo (EP Carrillo).

There’s also a piece in this issue on the changing role of the private sector in space travel. We went to four Houston smokers, each with years of experience dealing with NASA, for insights on what space tourism, private cargo shipment, and profit-driven innovation mean to how the boundaries are pushed in space.

Houston isn’t all rockets and space cowboys, of course. There are also regular cowboys. And cowgirls. You’ll enjoy our two Houston photo editorials — featuring models Alizé B. Moura, Valerie Goldin and Clayton Brannon. We had a great time shooting these, especially thanks to the change of pace that came when we got to meet some of the animals that were hanging out in the background. 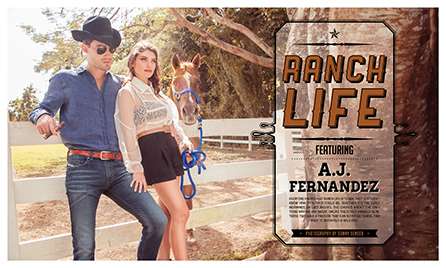