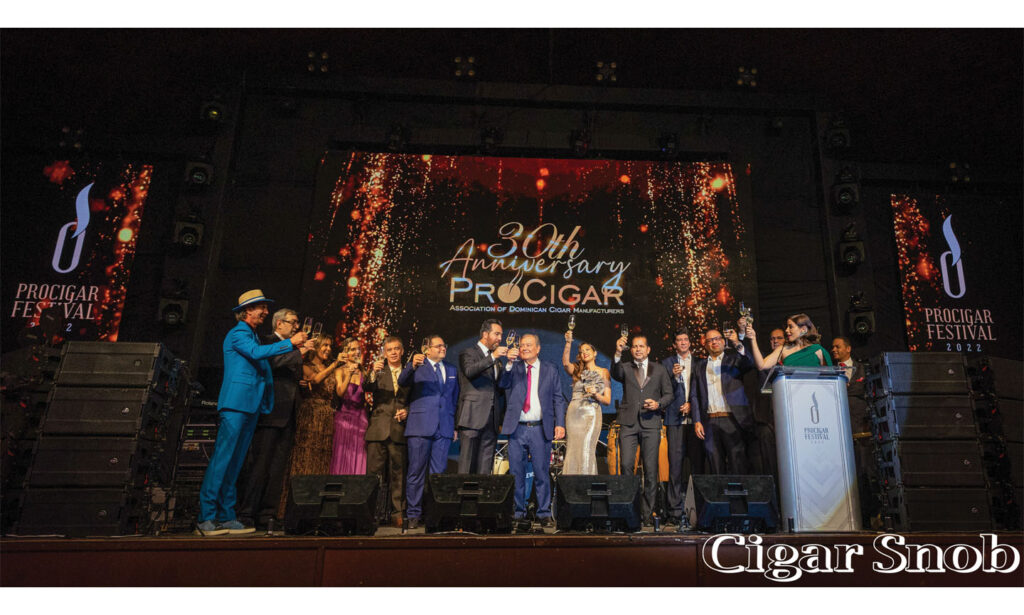 The Association of Dominican Cigar Manufacturers hosted the fourteenth installment of their beloved cigar festival after skipping a year due to the global pandemic. The festival’s more than 450 guests gathered in Santiago, Dominican Republic from more than 20 countries to celebrate the excellence of Dominican cigar manufacturing.

The festivities kicked off with a welcome cocktail in the terrace of the Hodelpa Garden Court. This event, not to be confused with the welcome dinner, serves as a casual reception where participants can meet with the principals and tobacco men of many of the ProCigar member companies.

The following day everyone went on his or her pre-selected tour. We had chosen La Flor Dominicana’s tour, which is one of the few that provides a field and factory tour on the same day. At the farm we were greeted with coffee, pastries, and refreshments before Litto Gomez and his team showed off their beautiful pasofino horses. In the fields Litto and Tony took us through every step of the process, from seedbeds to curing tobacco in the barns. The Gomezes’ attention to detail through every step of the tobacco’s journey never ceases to impress.

We headed over to the factory in Tamboril where they had prepared a traditional over-the-fire barbecue on a contraption that would have delighted even the great Francis Mallmann. The feast was followed by a performance by a local dance troupe led by Analia Mari, the woman who taught Litto how to dance tango and whose school he has donated to ever since. We then toured the factory with Litto leading the way. Maybe it’s the layout, the rocking chairs in the center, or the workers themselves but this place has a very different feel from other factories. The term factory does not do it justice. NOTE: Tony Gomez handed me an Andalusian Bull – The Golden Bull that absolutely blew my mind. It is a lonsdale version of the Andalusian Bull that is Litto and Tony’s private blend; it is perhaps the best cigar I’ve smoked all year.

Held at Santiago’s Parque Central (Central Park), the Welcome Dinner started with every guest receiving a beautiful cigar box evoking the tropical theme by combining vibrant colors and a wicker element on the lid. ProCigar president Henke Kelner spoke on the importance of tobacco in the Dominican culture and the quality of cigars being produced here. The night also included the now famous bachata dancing contest where the winner took home 4 collector’s cigar boxes from previous festivals.

La Aurora hosted groups at their beautiful factory and learning center where every participant was gifted a painted hat celebrating the birds of the Dominican Republic. The groups were taken on a guided tour culminating in a multi-sensory, immersive presentation and cultural dance at the factory’s main rolling room. For lunch the groups were taken to el Centro León, a facility built to celebrate the family’s history in Santiago, where they were treated to a special guided pairing of food, rum, and La Aurora cigars.

This tour, also incorporating a field and factory component on the same day, took groups through Jochy Blanco’s operation where they produce, among others, La Galera. This tour has a very laid back style, starting off with freshly cut, chilled coconuts. The view of the mountains surrounding the tobacco fields lends a dreamlike beauty to this place. The group was then transported to the factory, followed by a guided rum, coffee, and cigar pairing with Café Bella Aldea and Presidencial Rum.

No other event can compare to ProCigar’s White Party. It is quite literally the hottest ticket of the year in Santiago. For many of us ProCigar festival veterans, it is the night that we all look forward to every year. This year’s party paid tribute to the Dominican woman with the help of the uber-talented artist Evaristo Angurria. He finished his portrayal of “Doña Patria, Belleza Dominicana” during the party and unveiled it for all to see. He also designed the commemorative cigar box that was handed out during this night, again a stunning portrayal of a female Dominican tobacco worker. The event was held on the pedestal level of Santiago’s iconic Monumento a los Héroes de la Restauración. It is the only event annually held at this spectacular venue.

The culminating event for ProCigar was the Gala Dinner where impeccably dressed guests received their final commemorative box of the festival; this one made by Vrijdag Premium Printing in Holland. The night kicked off with an excellent dinner, followed by a spectacular live performance that brought the house down. Now we moved to the auction presided over by the dynamic duo of Michael Herklots and Manuel Quesada. The proceeds will benefit three Santiago charities: Voluntariado Jesús con los Niños (a non-profit organization for sick children), Sociedad San Vicente de Paúl (senior retirement home for low-income elders) and ProCigar’s charitable initiative “A Home for My Family” (housing program for disadvantaged employees of the member cigar companies). Among the popular one-of-a-kind auction items were a General Cigars Globe Humidor, a breathtakingly beautiful Saga humidor, a La Flor Dominicana Golden Bull humidor with impossible to get cigars, and a Fuente Fuente OpusX 25th Anniversary humidor designed by Manny Iriarte and loaded with limited edition OpusX cigars. All told the auction raised $350,000 US, a record for ProCigar. The evening continued with raucous dancing and revelry to put a bow on the 14th ProCigar Festival.